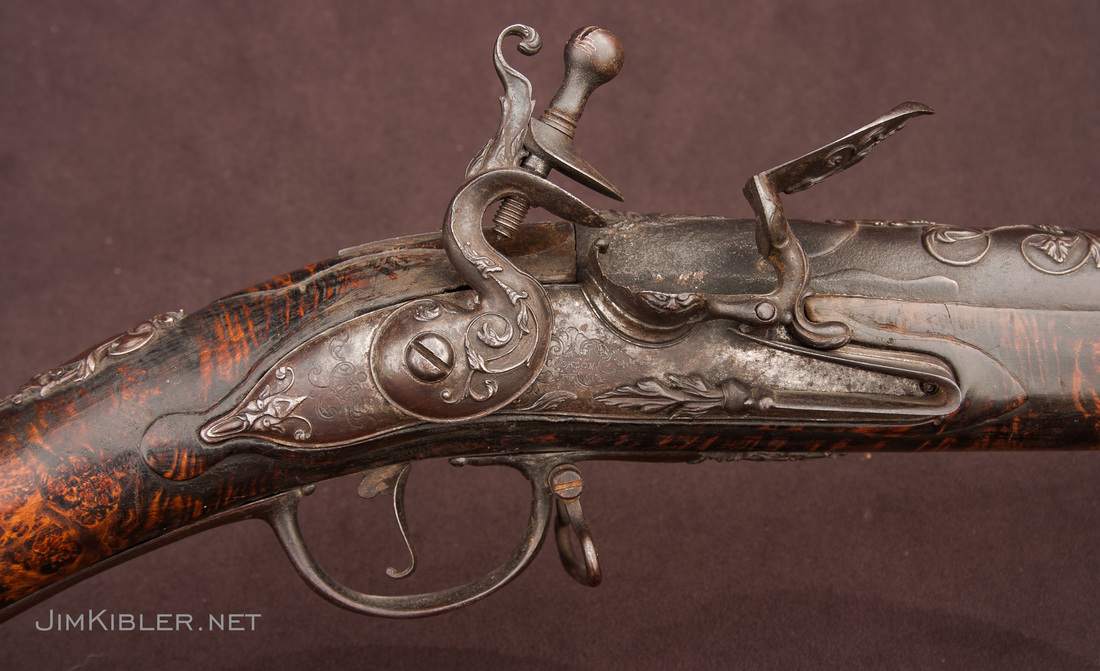 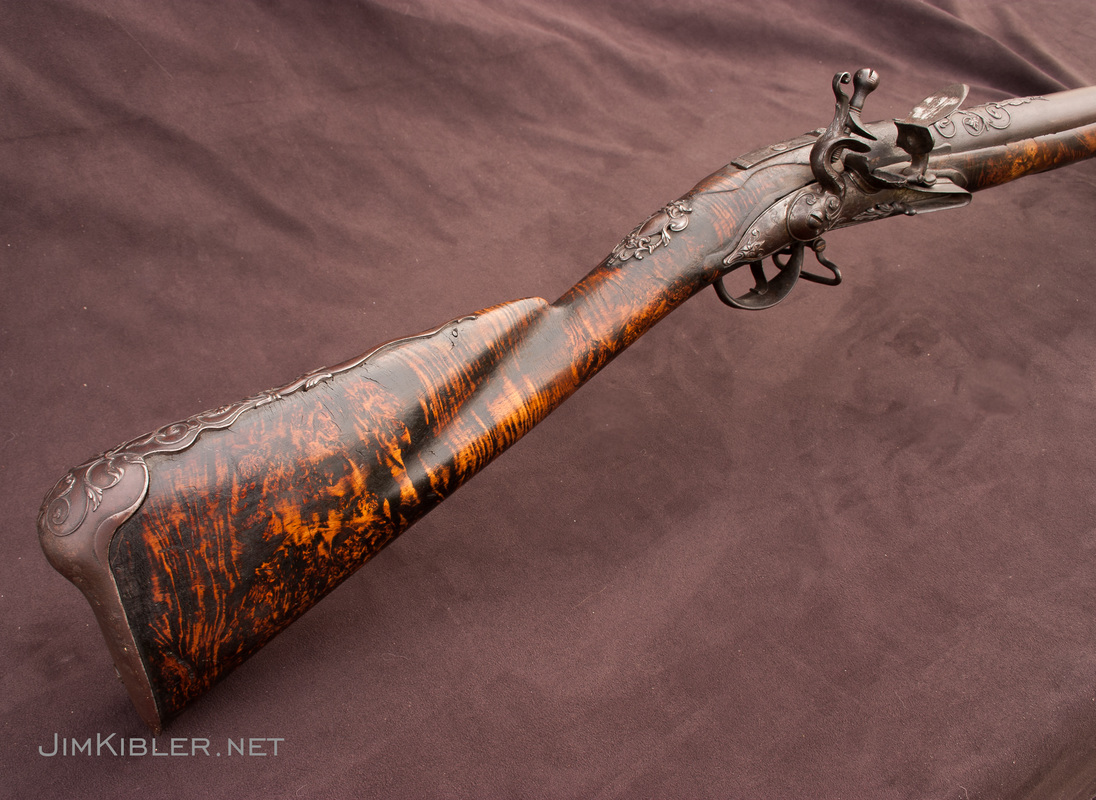 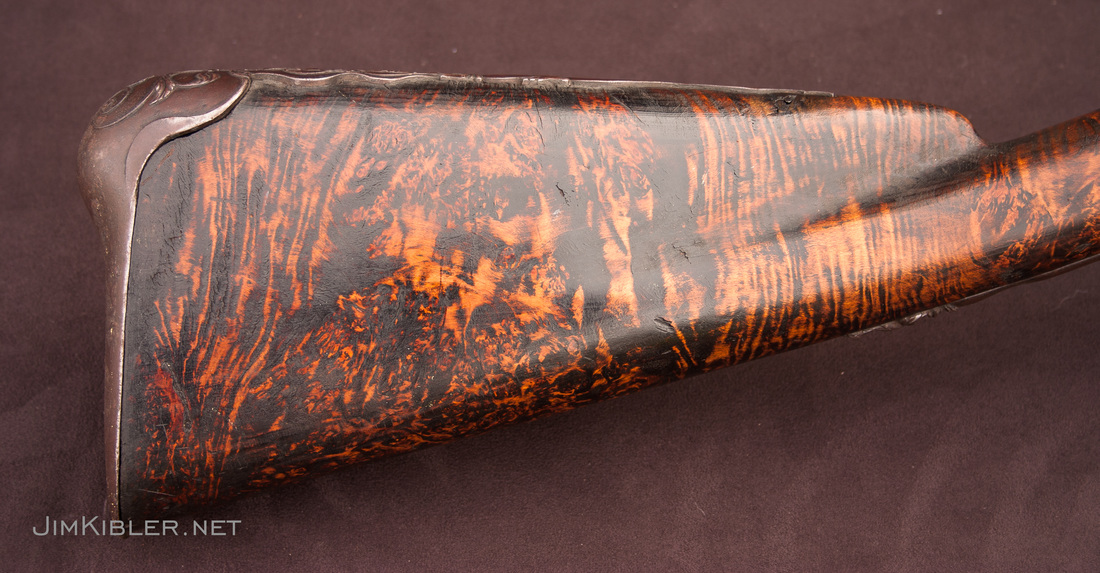 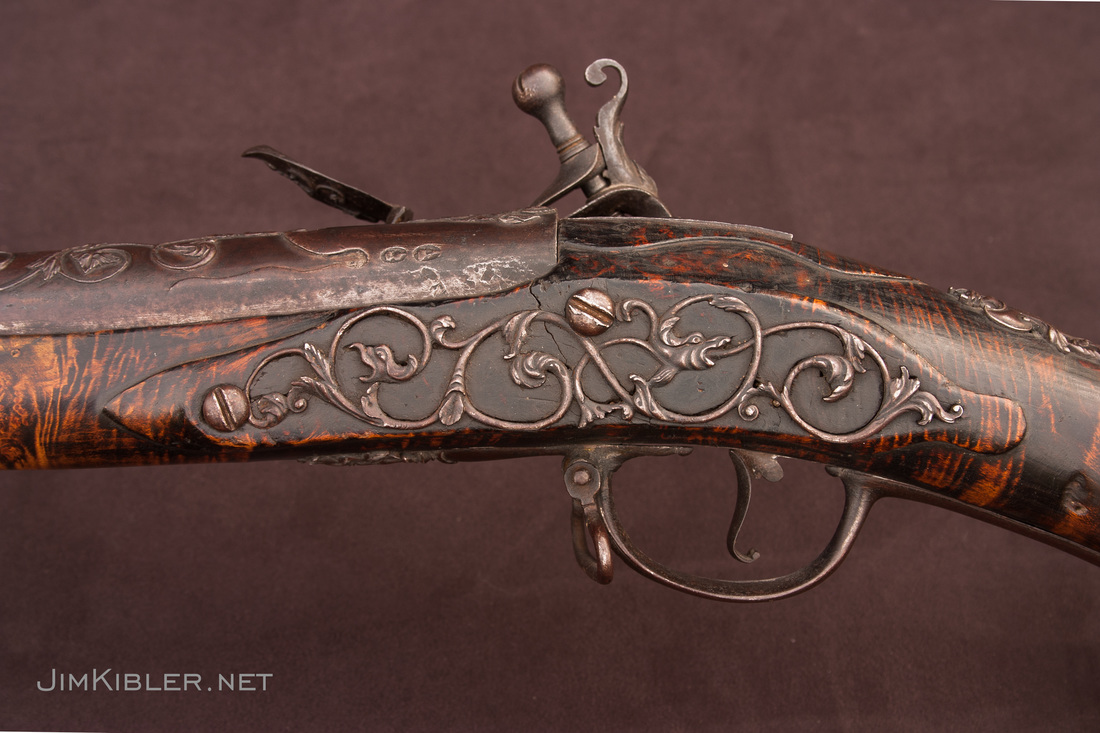 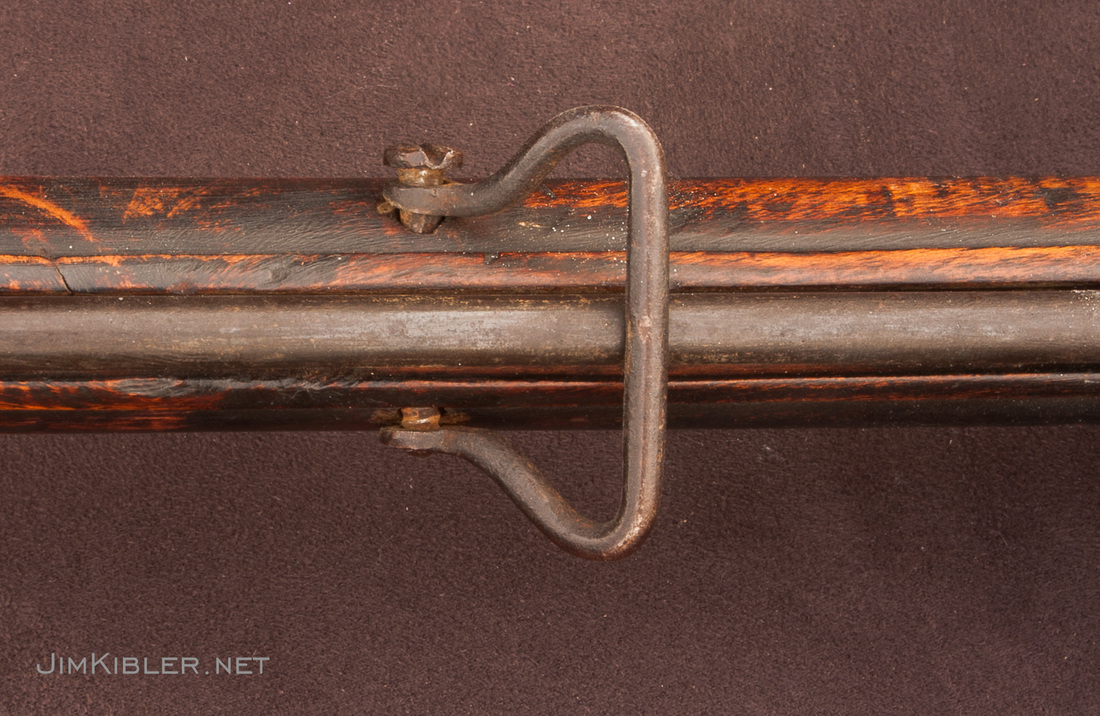 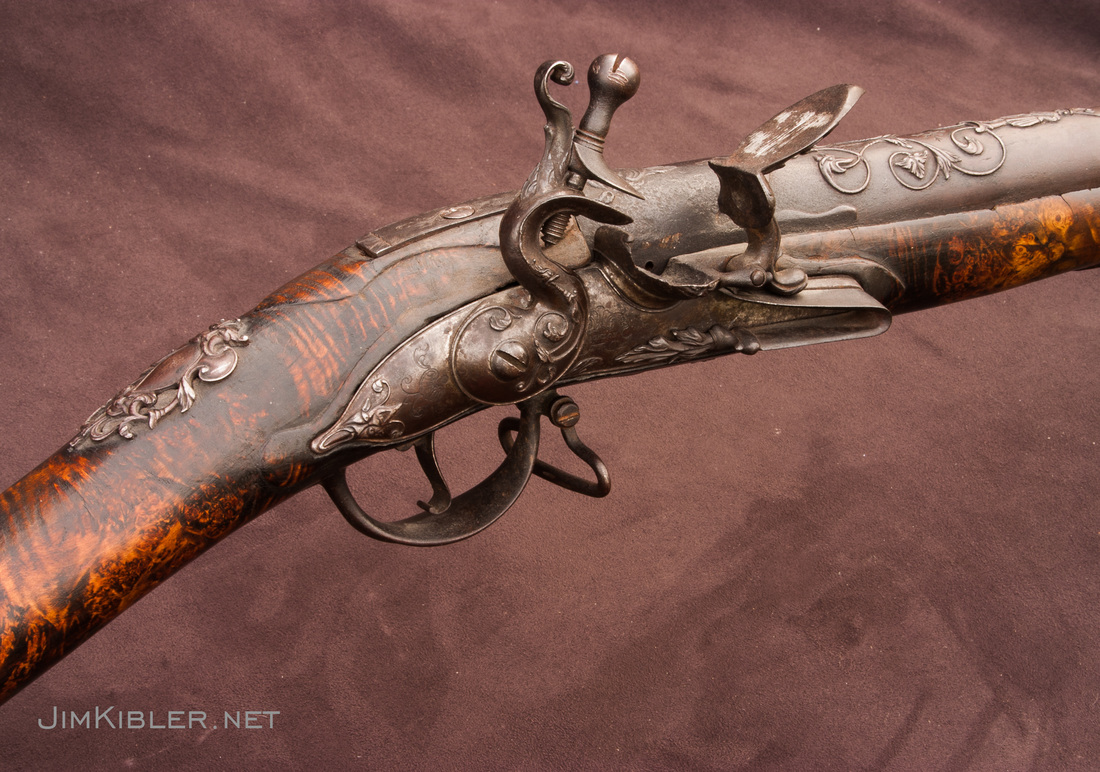 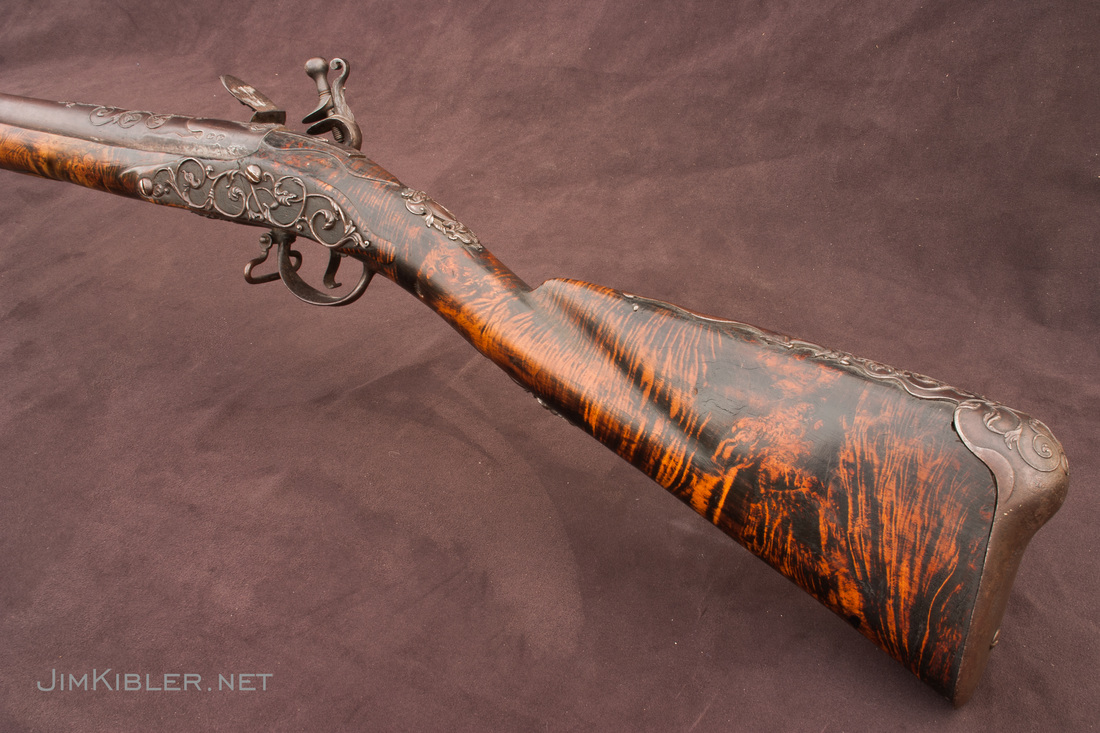 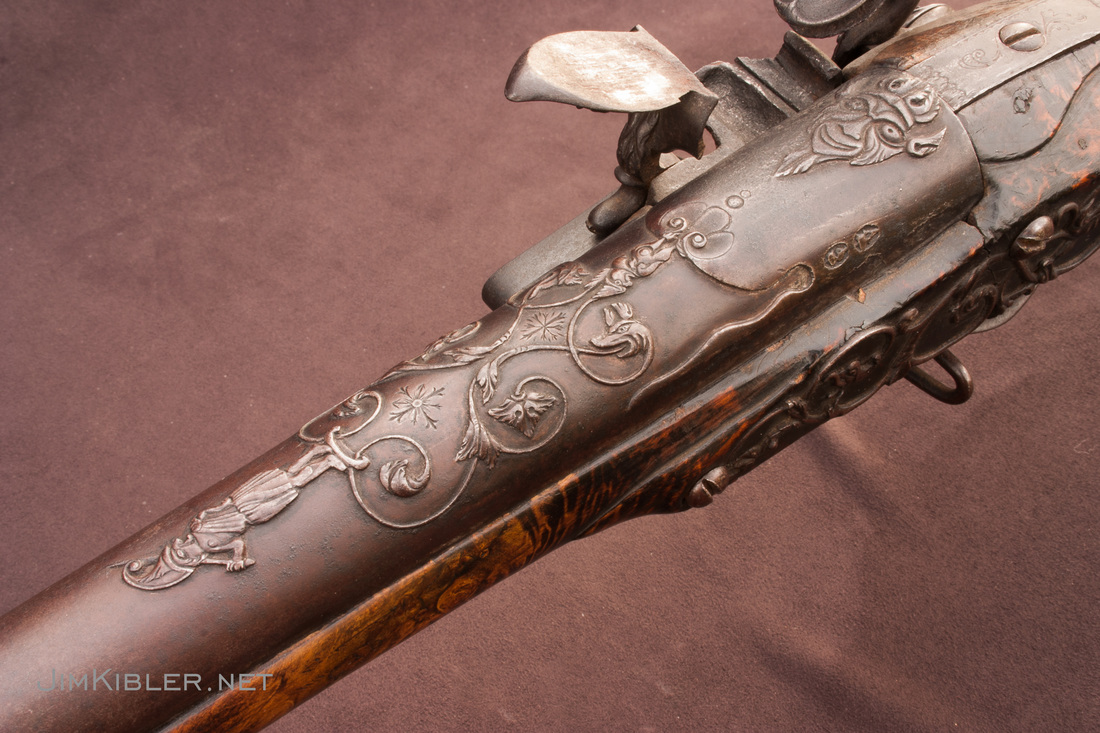 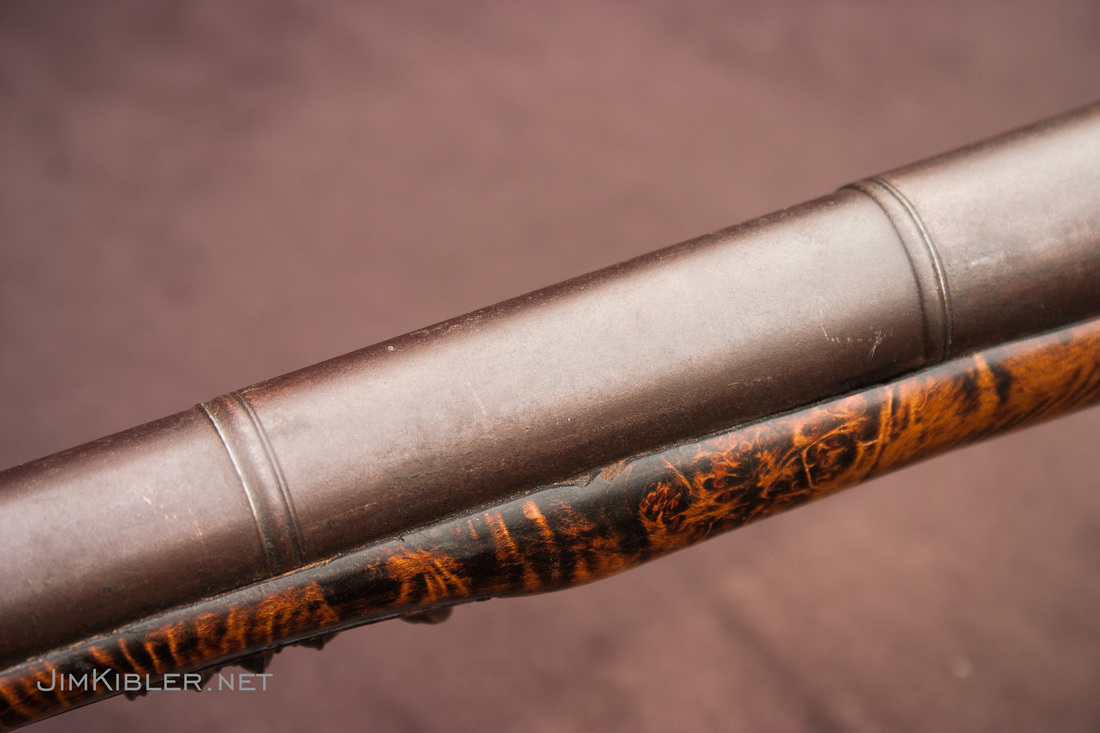 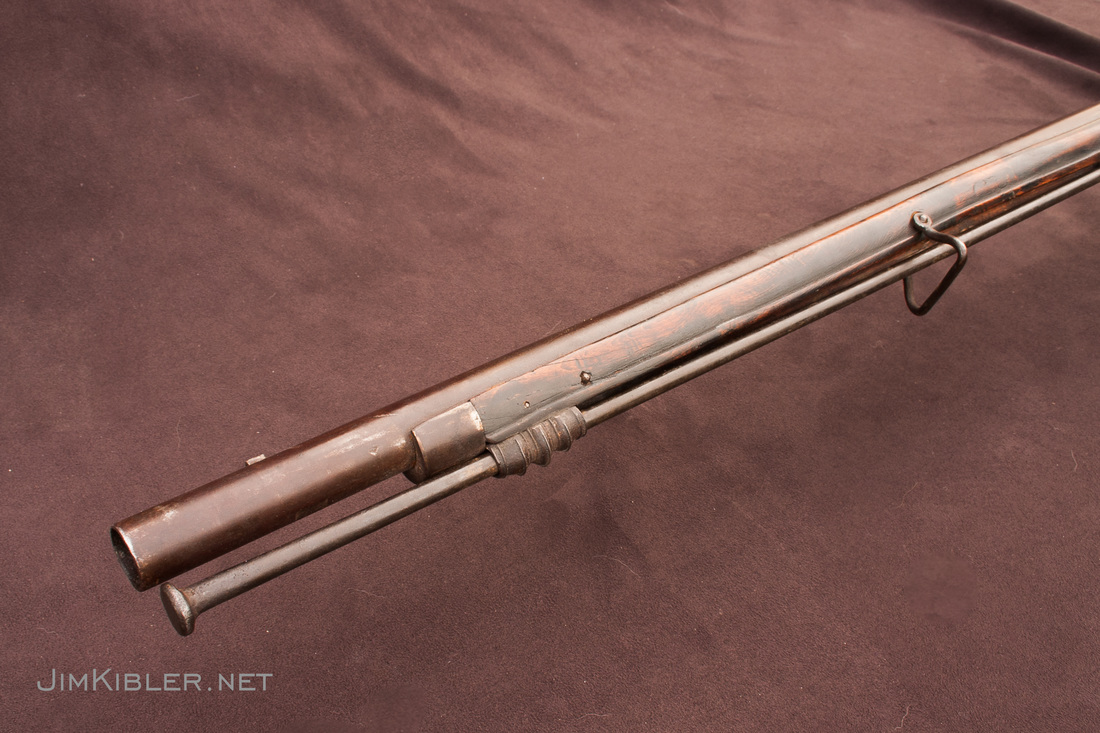 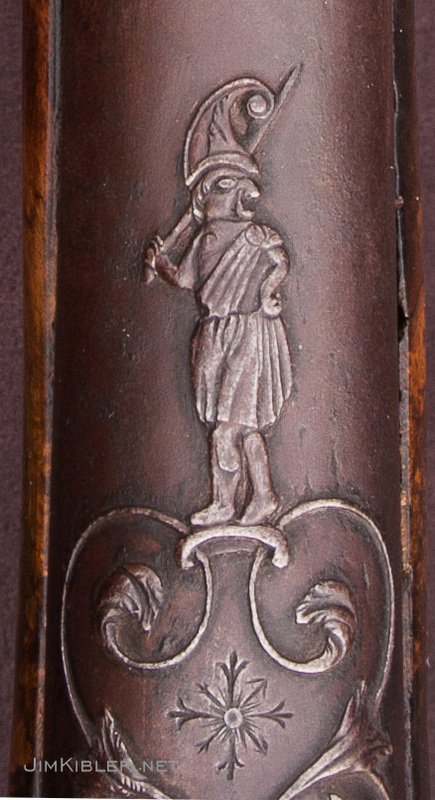 The lock plate of the gun being presented bears the name “Cookson” engraved in front of the cock.  This undoubtedly refers to the maker, John Cookson.  Three other guns of similar quality are known to have been built by John Cookson.  All of these other firearms are multi-shot guns built on the Lorenzoni System.  One of these Lorenzoni system guns is signed “John Cookson” and the remaining two are signed “John Cookson Fecit”.  Stylistically the fowling piece in question compares very favorably to these guns.  From this stylistic perspective, London seems the likely origin of each.  In addition, the fowling piece bears London proof marks on the barrel.  Although John Cookson is believed to have worked in London during the late seventeenth century, virtually nothing is known of him.  The previously mentioned firearms are the only evidence which tie him to London.  Interestingly enough, a John Cookson was present in Boston, Massachusetts by 1700 or 1701 and is listed as a whitesmith or gunsmith.  Period sources indicate this man died in 1762 at the age of 89 years in Boston.  A birth date of around 1673 can be therefore concluded.   Many have suggested this John Cookson, in Boston, to be a relative of the London Gunsmith.  This is certainly a possibility, however the John Cookson in Boston, may have been the same man who is supposed to have worked in London.


The fowling piece in question is strongly baroque in style.  It is mounted in heavily chiseled iron and stocked in burl maple.  Stylistically, most of the gun conforms to the last two decades of the 17th century; however, a few features suggest a slightly later construction date.  The first is the method the guard is attached to the stock. The guard on the Cookson fowling piece is inlet rather sitting on the stock surface.  There was a transition, in London, from surface mounted to inlet guards, which seems to have occurred sometime during the first decade of the 18th century.  In addition, the carved lock moldings are beginning to develop elongation at the forward and rear areas.  Again, these changes in lock molding form began to develop during the very end of the 17th century and continued well into the 18th century.  With this being the case a likely construction date would be 1700-1710; however it is not inconceivable that this gun could date from the very end of the 17th century.  From a decorative standpoint, the most notable feature of this fowling piece is the iron work and chiseling.  In general, the scale and form of this work is exceptionally bold and strong.  The chiseling is of extremely high quality.  Relief chisel work consisting of vines, scrolls, serpents and grotesques is present on the barrel, lock, butpiece, guard, thumbpiece and sideplate.  The stock is made from high quality burl maple and is carved with relief moldings and panels in a manner typical of the period.


An extraordinary aspect of this gun is its military connection.  Originally stocked as a sporting gun, at some point after initial construction, it was retrofitted for military service.  This consisted of additions of a bayonet, sling swivels and an iron rammer.  In order to accommodate a bayonet, the stock was shortened, the barrel loop nearest the muzzle was moved and a lug was added to the barrel.   Features of this bayonet retrofit point to it being American and likely of Rev. War era.  It is significant that a fowling piece of such high quality was pressed into military service.

The rarity, extraordinary quality and American connections surrounding this fowling piece make it exceptional.  For those interested in English, continental as well as American firearms, it is especially significant.  Few pieces with these credentials are ever encountered.